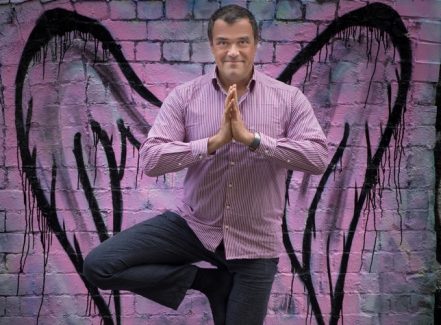 Michael Nickel, E-RYT 200/RYT 500 & YACEP, is a German Yogi, Scientist and Entrepreneur, who aims at inspiring people through yoga, mindfulness and meditation to live a balanced and fulfilled life. He lives in Stuttgart in southern Germany, but he provides workshops and specials throughout Germany. He is also a Scientific Consultant in the fields of Bionics and Evolutionary Biology. As a citizen of both worlds, the yoga and the scientific communities, he aspires to bring together aspects and knowledge of traditional yoga and meditation techniques as well as today’s scientific world view. By doing so, he is bridging the gap between the western mind and the ancient teachings of the Himalayan Masters tradition to make the latter even more accessible to western students of the 21st century. In 2017, he founded the publishing house “Agni Verlag” to serve this mission for a German audience.

Michael started his yoga journey in 2009 after facing severe stress related back pain and burnout symptoms. Yoga and yoga philosophy soon changed his life for the better. In 2012 he received his first yoga teacher certifications from the Sivananda Yoga Vedanta Centres. In 2013 he began his studies with his main teacher, Yogarupa Rod Stryker, and in 2014 also with Pandit Rajmani Tigunait of the Himalayan Institute. In addition, he also studies Yoga Therapy with Doug Keller. Since 2013 he travels frequently from Germany to the US and India for his studies with his teachers. In 2013 he received his Yoga for Corporates Teacher certificate (Business-Yogalehrer BYV) from Yoga Vidya Germany and in 2014 his Yoga for Children Teacher certificate (Kinderyogalehrer KYA) from Kinderyoga-Akademie Germany. In 2016, he received his ParaYoga Level 1 Teacher certification, followed by the Level 2 certification in 2017.

In his classes and privates, Michael emphasizes physical and mental stability, to support his students face the challenges of a modern world which is constantly moving on. He also creates mindful opportunities for experiencing inner stillness, both within asanas, as well as in meditation and deep relaxation.  Based on principles of Ayurveda and Samkhya philosophy, Michael aims at meeting the energetic needs of his students, both in the class setting as well as in one-to-one settings. Therefore guides relaxations, be it savasana or yoga nidra, breathwork (pranayama) and meditations are integral part of his guidance. He feels a deep gratitude towards his teachers, Yogarupa Rod Stryker and Pandit Rajmani Tigunait, for having empowered him with this deep knowledge of the tradition. In his classes, workshops and privates, Michael authentically passes on this knowledge to guide his students into self-empowerment, supporting them to face the challenges of living a meaningful and fulfilled life in the 21st century.